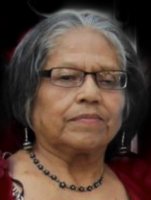 A loving mother and homemaker, Olga was a remarkable cook and enjoyed preparing meals for her family and friends, most especially over the holidays. Olga cared for all her grandchildren which were her pride and joy.  For many years leading up to her passing, she enjoyed watching her grandchildren play sports.  Her grandchildren could do no wrong.  They knew that when the going got tough at home, they could go to grandmas.  She would make them homemade tortillas and spoil them with love and kindness.  She was also a dedicated baseball fan and enjoyed watching the Seattle Mariners games. Olga was a kind, genuine and most of all a loving wife, mother, grandmother, great-grandmother, sister and aunt.

The family gives everyone who cared for Olga their greatest and warmest gratitude, especially Dr. Steven Koga.