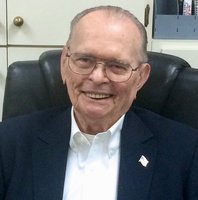 Dick was born in September of 1924, the youngest of four children born to Christian H. and Emilie V. (Callahan) Eismann.  Growing up in Grants Pass, Oregon, Dick worked on his father’s ranch located along the Rogue River.  His father had an orchard exporting fruit to Germany and later raised hops.  Emilie had been a school teacher.

At a very young age, Dick aspired to be a lawyer.  He had a love for debate and won the State of Oregon debate championship in 1940.  After graduating from high school in 1941, he attended the University of Oregon.  During WW II, he joined the Naval Reserve attaining the rank of Lt. J.G.  He was transferred to various locations in the US.  He trained to be an air traffic control officer on an aircraft carrier.  Just before he was to ship out to the Pacific Theater, the war ended.  He married his high school sweetheart, Joan (Signor) Eismann, in Norfolk, Virginia, in 1945.

Dick traveled to Wilder, Idaho, to help install a hop dryer.  In his words, “A cloud formed and it didn’t rain,” so he decided to move his family to Homedale, Idaho.  His parents and brothers followed later.  He opened a law practice in Homedale in December of 1949.  Two more children followed, Katherine Eismann and Susan Eismann.  His wife Joan passed away in 1953.

In 1960, Dick met the love of his life and life’s partner, Geraldine (Hale) Martinat.  They married shortly after meeting.  Geri brought her son Randy Martinat into the family and soon Dick and Geri had Karen (Eismann) Urbano and Debra (Eismann) Murphy.  With the growing family, Dick and Geri built a larger home outside of Caldwell in 1963.

Dick loved the practice of law and created a successful solo practice.  He embraced technology early on with the IBM Magnetic Card Selectric Typewriter.  He created numerous programmed legal documents that could be easily modified.  He could choose paragraphs and insert text keeping his staff of six secretaries busy.  He always took time to mentor young attorneys.  An attorney noted at one time that Dick “had the practice of law down to a science.”  IBM also took notice and sent a representative from New York to see what he’d done.  They asked him to work for them creating a similar system to be marketed to law offices.  Dick declined.  He loved practicing law and “did not want to advertise for IBM.”  Dick was very involved in the Homedale community, but after a fire above his office in Homedale in 1985, Dick and Geri built a new office on Caldwell Boulevard where it remains today.  His daughter Debra Eismann and grandson Ryan Martinat now own the practice.

Dick and Geri created a wonderful home with lots of entertainment for their children and grandchildren.  Each August, Dick and Geri vacationed towing their boat, “Idaho Eagle,” to Vancouver, BC, to navigate the Canadian waters fishing and crabbing. Dick enjoyed getting the whole family together to vacation whether it be on their trips to Canada or to Lincoln City, OR to share his love of the ocean and deep sea fishing. Dick enjoyed bird hunting, fishing, dirt bike riding and camping throughout Idaho.

Dick and Geri celebrated 60 years of marriage on November 8, 2020.  Dick continued to practice law with Geri by his side until November 27, 2020, when he withdrew from his last cases after 71 years as a practicing attorney.

He is survived by his wife, Geri, children, Joan Eismann, Daniel T. Eismann (Sheila), Katherine Eismann (Brent Williams), Randy Martinat (Wanda), Karen Urbano (Gilbert), Debra Murphy (David), and delighted in hearing of the accomplishments of his many grandchildren and great-grandchildren.

There will be a private memorial service due to COVID.

In lieu of flowers, donations may be made to Shriner’s Hospital for Children or the charity of your choice.