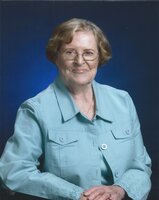 Always a classy lady, Beverly DeMark loved dressing up for dinner dates and being escorted by the love of her life Frank. She was dedicated member of her church. She will be remembered fondly for her love of camping, traveling, and her dogs. This lovely woman was 96 years old when she passed away peacefully at home on February 1, 2022.

Born November 17, 1925 in Nampa, Bev was the daughter of Gardner and Julia Parsons. Growing up during the Great Depression, she remembered her father taking her and her brother Bob to the railway station for entertainment to watch the trains come in and see the people exit. Her mother was a talented seamstress and made all of Bev’s clothes. She graduated from Boise High School in 1943. As a young woman, she trained as a nurse, received her cap, and was a plane spotter during WWII. Later, she worked for the space program and the forest service.

Frank and Bev met in Boise and were married for nearly 60 years. Not long after they married, they moved to Salmon, Idaho where they lived for 16 years. Bev was a legal secretary for a local law firm. She was a member of Beta Sigma Phi sorority, Lady Elks, and active at church. They left Salmon to travel in their trailer for three years, then settled again in Tucson for nine years, and finally moved back home to Caldwell. During her travels and retirement, Bev spent much of her spare time creating beautiful works of art by oil painting and cross-stitching.

She was preceded in death by her parents and her brother and his wife, Bob and Mary Louise Parsons. She is survived by her husband Frank; three daughters and their spouses: Valerie Crossland and Jeff Carlson; Vicki Gale and Jack Siemsen; Jacki and Roger Worthy; nine grandchildren, seven great-grandchildren, three great-great grandchildren (with another on the way), and numerous nieces and nephews. A private family service will be held at Canyon Hill Cemetery.

To view the graveside service live please go to: