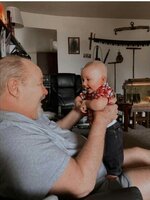 Mark Loren Wiloth, born on August 28, 1955, in Napa, California to Max and Francis Wiloth, went to Heaven July 18, 2022 in Caldwell, Idaho.  He was a gentle man, much loved by his family. He was a MOPAR guy and loved to fish. Mark had a very quirky sense of humor and not much of a filter, so he always had us laughing.

His family moved to Idaho when he was 2, and Idaho has been his home ever since. He attended Midway Elementary and later Vallivue JR/SR High School.  He married Vickie McEnroe and that union brought Mark Loren Wiloth II.  He later married Debbie Huffman and from that union cam two teautiful daughter Mandi and Brook Wiloth.  In 2016, he marred the love of his life Patsy Wade.  Mark worked for Simplots for 38 years and retired in 2016.

He was preceded in death by his parents Max and Francis as well as a sister (Jacqueline) Sherry Hall, nephew Christopher, and Ruth and Rick Martin (family friends) who were adopted into the Wiloth family many years ago.

He will be greatly missed by all who knew him. Our hearts are broken, but he is at peace with family in Heaven.