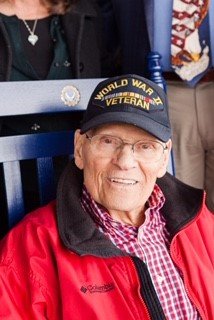 Our beloved husband, father, grandfather and great-grandfather, Alex Silva passed away on September 2, 2019 of natural causes.

Alex was born in Puerto Rico on November 30, 1927 to John Silva and Candelaria Correa Yulfo. He was the youngest of three children.  He served his country in the U.S. Navy in WWII and in the Korean War. He changed services from the U.S. Navy to the U.S. Air Force, and served in Pleiku, Vietnam. He was one of the few remaining veterans in Idaho who served in the Cold War, WWII, Korea, and Vietnam.  He earned the Asiatic-Pacific campaign medal for WWII service in the Pacific theater, January 1945. He earned the Vietnam campaign medal for service in Pleiku, Vietnam, January 1970.

He graduated from Catholic School Puerto Rico. He and his two siblings attended one year of High School in the U.S.  After WW II he attended and graduated from the University of Nebraska.  He then retired from the military and taught at various high schools in Idaho.  He was an avid long distance runner, winning many foot races and marathons in his age group.

He was preceded in death by his parents: John and Candelaria; brother Henry Silva who served in the Army Infantry, and who was wounded in the Invasion of Italy, September 1943; brother Edward Silva who died at age 3; and grandson Clayne Carl Beck II who died in 1992.

Inurnment and Services will be held Friday, September 13, 2019 at 1pm at the Idaho State Veterans Cemetery in Boise, Idaho.  Arrangements are under the care of Flahiff Funeral Chapel in Caldwell, Idaho. Friends may share a memory of Alex at www.flahifffuneralchapel.com.  In lieu of flowers, donations may be made to Nampa Salvation Army: 403 12th Ave. South, Nampa, Idaho 83651

In lieu of flowers

Share Your Memory of
Alexander
Upload Your Memory View All Memories
Be the first to upload a memory!
Share A Memory
Send Flowers