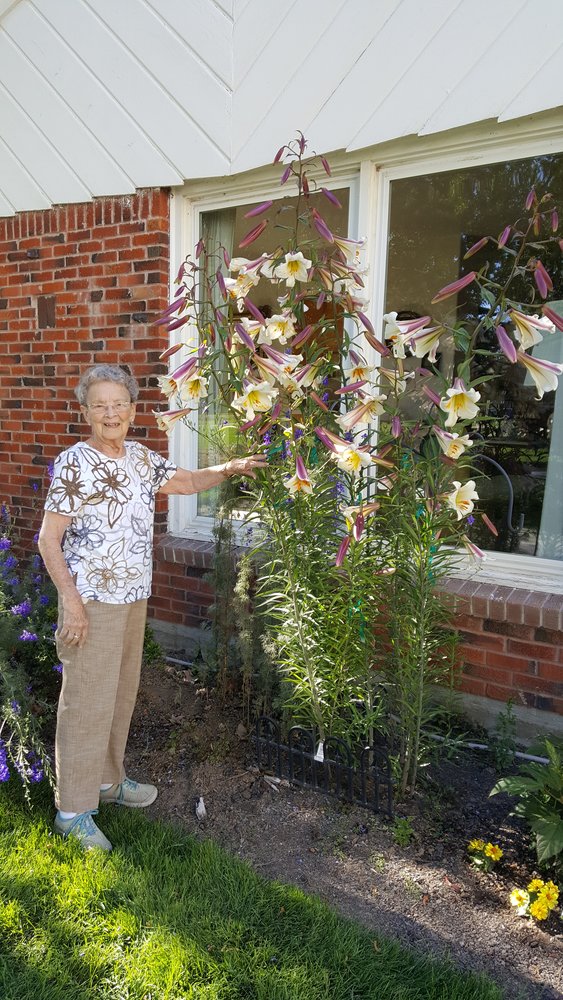 Mary Elizabeth “Betty” Bellaire Kinsey died on September 6, 2019 at the age of 92 with one of her daughters by her side. She was able to say good-bye to all her other family members in the week preceding her death. Then she was at peace to meet our heavenly Father.  Betty was born on January 16, 1927 in Bergen Park, CO to Charlotte and Dan Bellaire. Her father died six weeks before she was born.  Betty and her mother moved to Firth, Idaho when Betty was two. When she was four Charlotte married Albert Burkman, who became Betty’s stepfather.

Betty attended schools in Firth, Riverside and Idaho Falls before going to college. She first went to ISU which at that time was called the southern branch of the U of I. After two years, she transferred to the U of I.  After just 3 weeks she met the man of her dreams, Henry Kinsey. They were married on March 13, 1948. Betty graduated in June with a business degree. She worked as a credit manager in a furniture store until Hank finished his degree.

When Hank graduated, they lived in Shoshone and Idaho Falls until they moved to Caldwell in 1951 where Hank was a part owner in West Gemco, a farm machinery dealership. They had three daughters Kathy, Vickie, and Cindy. Betty was a stay at home mother until Cindy started kindergarten. Betty took additional classes so she could be a business teacher, and in 1959 started her career as a business/accounting teacher at Caldwell High School. She taught for 30 years. She loved her career so much that she encouraged her daughters to add a teaching credential to whatever degree they chose to attain.

Betty and Hank enjoyed traveling, taking several trips to other countries, but also enjoyed traveling with good friends in their Winnebagos to most of the western states. Betty enjoyed working in her flower beds and was especially proud of a lily she grew a few years ago that was 6 feet tall. Everyone appreciated being a recipient of Betty’s love for bread baking.  At the suggestion of her grandson, Greg, she started the family tradition of pie bar for holiday meals and other special occasions.  She was affectionately called “Nonny” by her grandchildren and great grandchildren. Each grandchild and great-grandchild have a Christmas stocking painstakingly appliqued by her. She was thrilled with her 90th birthday party where her family shared their favorite memories of her, both serious and silly. Betty enjoyed her glass of port in the evening but wanted her wine glass filled almost to the top and not just that tiny amount they serve in a restaurant.  Her biggest joy was her family. She loved hearing about every member and sharing their accomplishments with anyone she talked to.

Several years ago, Betty joined P.E.O. and later moved into one of the cottages at the P.E.O. Chapter House. There she met some of her dearest and closest friends. She also cherished the friendships she made when she was able to go to water aerobics.

Betty was preceded in death by her parents, Henry her husband of 50 years, and her son-in-law Dan Owings. She is survived by her daughters Kathy (Jim) Iverson, Vickie (Keith) Owings, and Cindy Owings, her 7 grandchildren Greg Iverson, Laura Iverson Bastiani, Nicholas, Owings,  Christopher Owings, Holly Owings Wuest,  Steve Owings and Kent Owings, plus 11 great-grandchildren and her puppy Raven who gave her great comfort these last several weeks.

A memorial service will be held on Saturday, September 14, 2019 at 2:00 pm at Flahiff Funeral Chapel in Caldwell.  In lieu of flowers the family requests donations be made to the P.E.O. chapter house [114 E Logan St, Caldwell, ID 83605]. Condolences can be given at www.flahifffuneralchapel.com