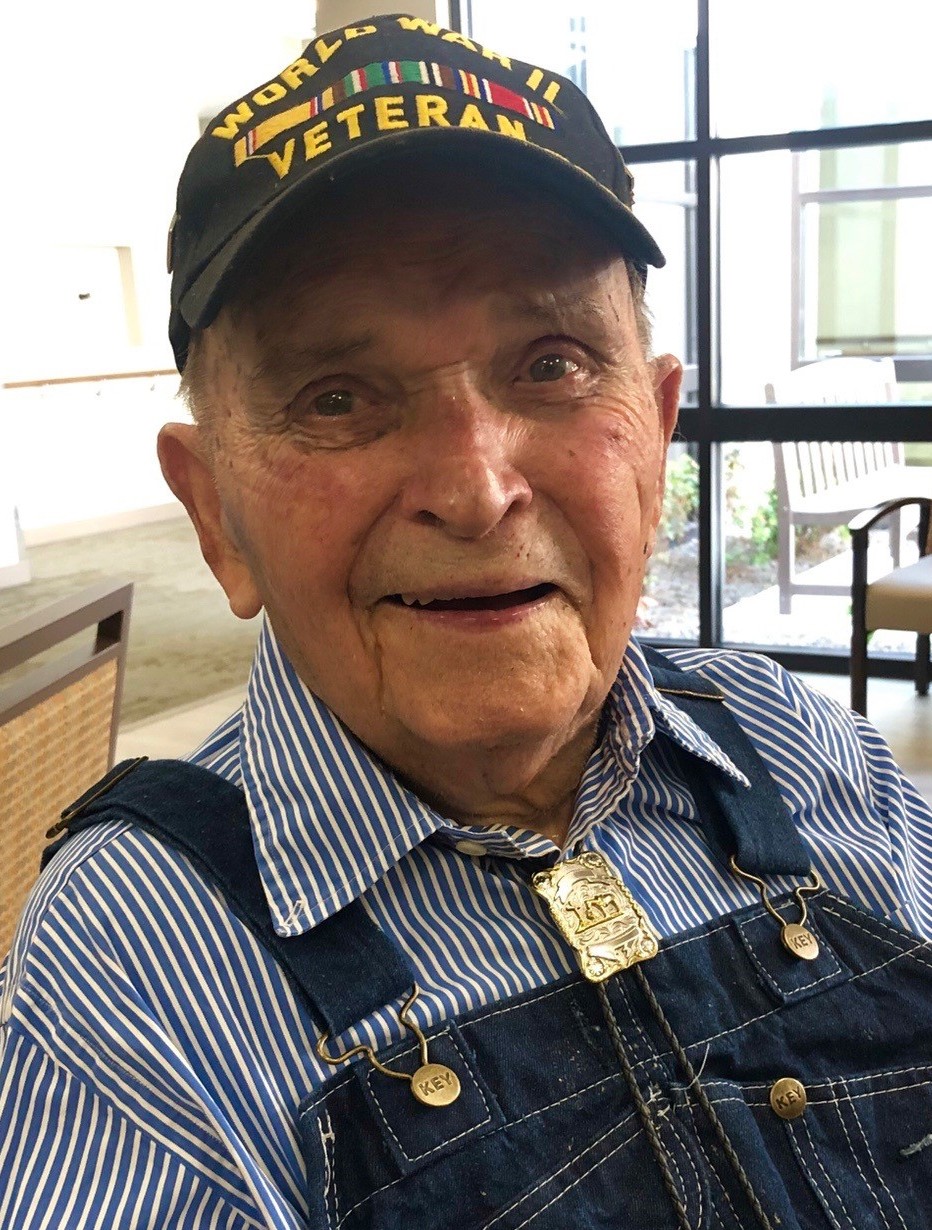 On Monday, October 7, 2019, Haskell Calvin Ford passed from this life to his Heavenly Home at the age of 99. Haskell was born on March 16, 1920, in Stillwell, Oklahoma, to Laban and Florence Azalee Ford. Haskell was one of 11 children and he was frequently spotted barefoot and in overalls with his siblings. Growing up during the uncertainty of the Great Depression forced Haskell to go to work at a young age working in the orchards with Ms. Keane of Oklahoma.

He met the love of his life, Charlotte (Cochran) Ford at the Star School Pie Supper in 1938. They frequently told their love story of how he grabbed her hand as they were leaving the schoolhouse and though she didn’t know who he was, she let him walk her most of the way home in the night as “dark as a stack of black cats”.

At the breakout of World War II, Haskell enlisted in the United States Army and served as a sharpshooter stationed in Alaska, France, and Germany during the war. While deployed, he learned to cut hair, which fueled his passion for his future career.

He returned home after the war and married Charlotte on May 12, 1944, in Kansas City, Kansas. They moved to Texas where he continued his military service. After being discharged from the Army, Haskell and Charlotte moved to Fullerton, California, where he attended barber school in Long Beach. He owned three barbershops in his life, two of which were located in Fullerton, including Ford’s Barber Shop and French Village Barber Shop. During his years as a barber, he cut the hair of Walter Knott (founder of Knott’s Berry Farm) and Carl Karcher (founder of Carl’s Jr.). At one point, Carl Karcher wanted Haskell and Charlotte to go into business with him for his small hamburger restaurant but Haskell wanted to continue cutting hair, so he declined. That restaurant soon turned into the Carl’s Jr. chain, but Haskell never doubted his decision, constantly stating that he loved every day of his career and would never change it.

Haskell and Charlotte raised their two daughters Donna and Darlene in California but still loved to visit their families in Oklahoma every October. They made over 70 road trips to visit family over the years and it was those trips that Haskell looked forward to the most. He took pride in his Cherokee heritage and liked to tell stories about the tribal history in the area. He was regularly seen in a tie, cowboy hat, and boots except for his days off where he’d mow the lawn and play with his grandkids in his overalls. He loved to take his grandkids to the corner store for ice cream in his red wagon. He enjoyed bluegrass music, World War II documentaries, and a good cup of coffee. He was always present for his family, showing them every day that they were his priority. When Donna and Darlene played softball, he never missed a game. He played the guitar and the harmonica and loved singing his girls to sleep at night. He was a great cook and his family looked forward to his taco dinner every Monday night. He was a true extrovert – he loved entertaining and preparing to have company. When out in public, he never met a stranger. He was able to easily strike up a conversation with anyone he met.

Haskell’s pride and joy was his burgundy Lincoln Continental. He was notorious for driving around Fullerton, his “piece of Heaven on Earth” as he called it, with American flags sticking out of the windows as if he was driving the President around. He held onto his roots of Oklahoma by attending county fairs to look at the animals and planting his own garden in the backyard. He could be found five days a week at his barbershop cutting the hair of his treasured customers that he considered his friends. During his 65-year career, he never missed a day of work and he cut over 600,000 heads of hair, enough to fill every seat in Angel Stadium over 13 times. He continued working as a barber until he retired at the age of 90 in 2010.

Haskell loved our Lord and Savior Jesus Christ with all of his being. He was a true patriot, a man who loved the United States of America. He was a poet and traveled to Washington D.C. to read some of his poetry. He had reverence for the flag and the Bible. Haskell will be remembered as a man of great faith and wisdom who taught his children and grandchildren to always “Keep on the Sunny Side.” An eternal optimist, he would say everyday is a beautiful day. He will be remembered as a man who could make anyone laugh and loved to entertain his family with funny songs and rhymes from his early years. Anyone who met him felt it was a pleasure to be in his presence as he made any environment peaceful and joyful. Haskell will be remembered by his family as the greatest Husband, Daddy, and Papa that ever lived.

The funeral will be held at 10AM MDT on Thursday, October 17, 2019, at Deer Flat Church in Caldwell, Idaho. Following the service, there will be a processional led by the Patriot Freedom Riders to the Boise Veterans Memorial Cemetery.

To send flowers to the family or plant a tree in memory of Haskell Ford, please visit Tribute Store
Thursday
17
October

Share Your Memory of
Haskell
Upload Your Memory View All Memories
Be the first to upload a memory!
Share A Memory
Send Flowers