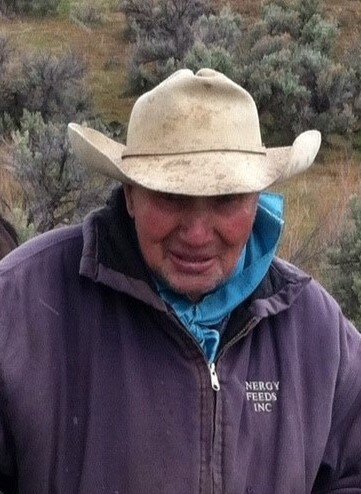 William “Bill” Anson Lowry was born June 6, 1921 to Charles and Sally Lowry joining a sister, Hazel in Bend, Oregon.  He was later joined by 3 brothers (Bob, Al, and Richard) and 7 more sisters (Effa, Gladys, Rhonda, Alta, Dorothy, Betty Jean, and Peggy). The family lived in Prineville, Oregon where Bill began school.  They moved a couple times but landed back in Prineville where Bill graduated from the 8th grade.

After his 8th grade graduation, he began working for the Stearns Cattle Company of Prineville.  His Army discharge report listed his civilian occupation as “cowpuncher.” Bill always had a lot of respect for the Stearns family and they became his second family. It was there that he met the love of his life, Vernita “Nita” Hein, who was working in the cookhouse.

In 1942 after the bombing of Pearl Harbor, Bill was drafted into the United States Army. However, his induction was pushed back because of the flood of boys enlisting.  Bill always wanted to honor the boys who quit school and rushed to enlist, describing manyof them as being “too young to shave”.  He related his experience and desire to honor these young men to Idaho State Representative Christy Zito at a meeting in Pleasant Valley.  Christy then told his story to her friend, Brian Arnold, who composed a poem entitled “Too Young to Shave.”  Through the good work of the Idaho Chapter of Dream Catchers, the poem is now engraved on a marble plaque and displayed in the Warhawk Museum in Nampa, Idaho, fulfilling his dream of honoring these young men.

While on leave from his time in the Army Corp of Engineers, he married Nita on July 31, 1945.  He was discharged in November of the same year and the young couple returned to Bill’s job on the Stearns ranch.  The couple began to save their money to realize their dream of owning their own ranch.  They worked hard, lived simply, and saved every penny they could even with the addition of their sons, Tim and Mike.

Eventually they were able to lease a couple of ranches, later purchasing a ranch in Pleasant Valley, Idaho in 1965.  One of Bill’s greatest joys in life was working on his ranch and with his Hereford cattle. His love (some would say obsession) for Hereford cattle came from his years of working for the Stearns and with their reputation commercial and registered Hereford cattle. His passions were family, Hereford cattle, thoroughbred saddle horses, conservative politics, education, and unwavering patriotism.

Bill is survived by his sons and their families, Tim (Rosa Maria) and Mike (Gaylene); 10 siblings; 5 grandkids- Miren Lowry, Amaya (Jim) O’Connor, Luke Lowry, Micki (Kevin) Golden, and Melissa (Cody) Bullock; and 9 great-grandchildren. He is preceded in death by his parents, Charles and Sally Lowry; oldest sister, Hazel; and wife, Nita.  His family would like to express their deepest appreciation to the staff and residents of Grace Assisted Living in Nampa and the First Choice Hospice caregivers for their kindness to and care of Bill.  He was grateful for all of you!

Memorial Services will be held Saturday, December 7, 2019 at the Jordan Valley Elementary Gym at 11:00am with graveside services to follow immediately after. Dinner will be served at the Parish Hall after the services. In lieu of flowers the family requests donations be made to the Children of Fallen Patriots Foundation (www.fallenpatriots.org), who provide college scholarships and educational counseling to military children who have lost a parent in the line of duty.

To send flowers to the family or plant a tree in memory of William Lowry, please visit Tribute Store
Saturday
7
December

Share Your Memory of
William
Upload Your Memory View All Memories
Be the first to upload a memory!
Share A Memory
Send Flowers