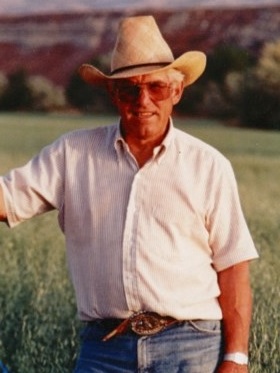 Paul Emerson, 90, died peacefully Friday, March 6, 2020 at his home in Riverside surrounded by his family.

Paul was born the 10th child of 11 on a farm in Comstock Nebraska, the son of Richard and Lula Emerson. He moved with his family to Marsing in 1940 where he attended and graduated from Marsing High School, class of 1948. He enjoyed playing sports, particularly football, and had many stories about playing against Marsing’s biggest rival, Homedale.

In 1949, Paul married his high school sweetheart and life-long love Imogene Lane and they made their first home in Homedale where he worked at Homedale Feed and Seed and their two sons, Doug and Jeff, were born. In 1962 Paul and Imogene bought a dairy farm in Riverside where they worked side by side milking cows twice a day for over 30 years on their beautiful farm nestled in a curve of the Snake River in the shadow of the Owyhee Mountains.

A man of faith, Paul and his family were founding members of Marsing Assembly of God and Nampa First Assembly of God churches. Paul was active in his church communities serving on Boards, acting as Deacon, and organizing and attending retreats and Prayer Breakfasts. One of his legacies is being one of the founders of the Marsing Prayer Breakfast.

An amazing storyteller, successful farmer, generous community member, and most notably the best husband, Dad, Papa, and Papa Great that could ever be dreamed of. He was truly beloved by all that met him and will be greatly missed.

A funeral service will be held at Homedale Flahiff Funeral Chapel and there will be internment at Marsing Homedale Cemetery.

To plant a tree in memory of Paul Emerson, please visit Tribute Store

Share Your Memory of
Paul
Upload Your Memory View All Memories
Be the first to upload a memory!
Share A Memory
Plant a Tree