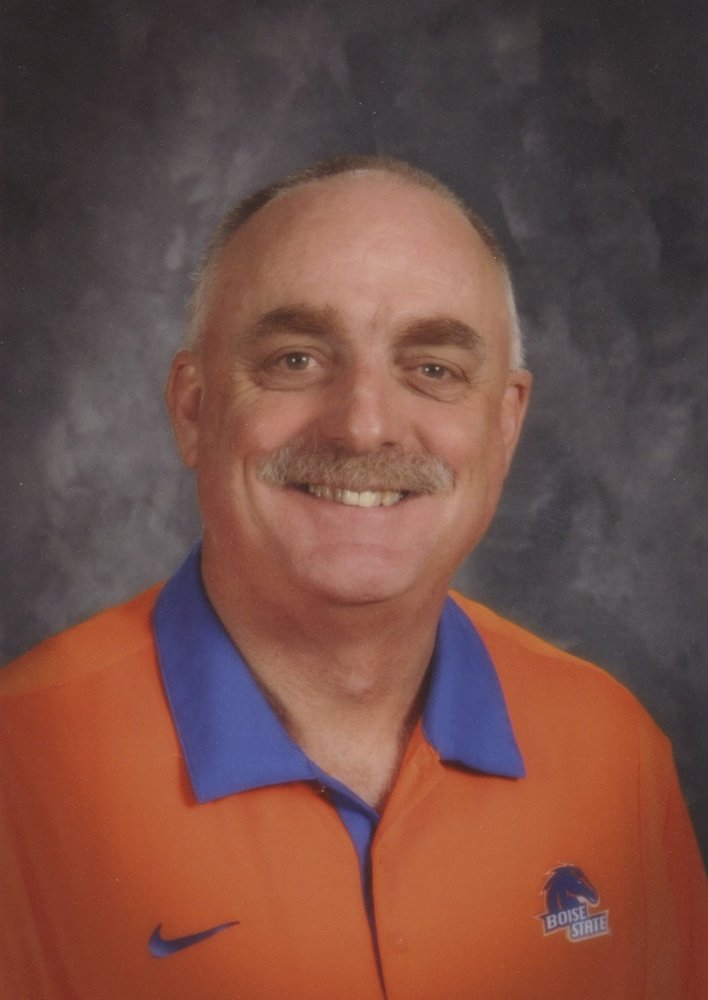 Ronald J. Nuxoll, 63, of Caldwell, Idaho passed away at his home Tuesday, March 17, 2020. Ron was born February 9, 1957 in Cottonwood, Idaho to Adrian and Sally Nuxoll. He grew up in Cottonwood and Greencreek, Idaho, attending St. Joseph’s Catholic schools and Prairie High School. Ron attended Boise State University, earning his Bachelor of Science in 1979. He pursued every educational opportunity through his life and completed all the coursework for a Masters degree. He began his teaching career at Jefferson Junior High in Caldwell in 1979 and moved to Caldwell High School in 1985. Ron taught the rest of his career at Caldwell High School, retiring in 2013. He continued to contribute to the school as a substitute teacher and scorekeeper for basketball and football games.

In every aspect of his life, he was a teacher first, both in the classroom and as a coach. He volunteered free time to tutor students and family members and celebrated every student’s achievements with them.

Ron was a gifted athlete in high school, competing in basketball, football, track and baseball. Sports were a central theme of his life. He competed in college intramural sports, played softball for years and competed with friends and family at any athletic contest at hand. Golf was his main passion in later years.

He was also a huge sports fan and his love for the New York Yankees is well-known. His home was filled with memorabilia and mementos and a trip to Yankee Stadium in 2007 fulfilled a lifelong dream. He was also a devoted Boise State fan and a football season ticket holder. He enjoyed fantasy sports, running and participating in fantasy leagues with family and friends.

One of Ron’s great joys was working at basketball and football games for the Idaho Stampede, Caldwell High, College of Idaho and the last 24 state high school basketball tournaments. His greatest pleasures were seeing old friends who he always greeted with a smile, a hug or his trademark high-five. Ron was known for an easy smile, a big sense of humor and a love for teasing others. Ron was always the positive one in a group, seeing the fun in any situation and you never caught him in a down moment.

Ron was a treasured son, brother, uncle and friend. He always said his family came first. He would do anything for his brothers and sisters and especially loved all his nieces and nephews. He was completely devoted to his mom, Sally, and would make special trips to see her if he thought she needed help or just some company. Ron loved time with family, including work days on the farm and in the woods, playing cards, competing to solve puzzles, teasing his nieces and nephews, football games, family meals and any excuse to be together. He loved every holiday and particularly Greencreek 4th of July, seeing old friends and bidding against his brothers at the auction to buy a can of beer and bag of jerky. Every visit ended with a huge hug. He loved dearly and was loved dearly.

Ron had too many friends to number and he was proud to count many former students as friends. Those students knew they could call him for advice or support and he was pleased to be a friend and mentor to many. Many of his closest friendships spanned multiple decades and he treasured every single one. A list of his close personal friends would fill multiple paragraphs, but he would want to mention a special friendship with Aly Baerlocher. He would get together with Aly whenever he could to play golf, go to games or just hang out and have a beer. Ron spent his entire teaching career at Caldwell with Jack Kelpin and they remained inseparable friends until their retirement together and beyond. They taught together, coached together, golfed together, worked basketball games together and supported each other in every way possible.

Family members knew that an outing with Ron included former students coming up to say hi to “Mr. Nuxoll” and receive a warm hug or handshake. Ron was thrilled to receive greetings from his students and after every encounter he would spend time remembering details about them. As he neared retirement, that often included memories of their parents who had been students before them. He was proud of the connections he made with students and had something good to say about every one of them. He was an unfailingly positive person and he was loved and admired as a teacher, coach, mentor and friend.

Ron was a communicant of Our Lady of the Valley Catholic Church. Memberships included the Knights of Columbus and Caldwell Elks Club. Survivors include his treasured Mother, Sally Nuxoll; siblings: Dan Nuxoll and wife Reema Nayar, Dick Nuxoll and wife Donna Nuxoll, Mary Nuxoll, Phil Nuxoll, Dave Nuxoll, Karen Edmundson and husband John Edmundson, Mark Nuxoll and Rita Nuxoll; nieces and nephews: Kylie Nuxoll, Lauren Nuxoll, John Edmundson, Stephanie Nuxoll, Andrew Nuxoll, Diya Nuxoll and Ravi Nuxoll, listed in order of age but all number one in his heart. He was preceded in death by his father, Adrian Nuxoll. Every member of the family has their own special memories of a wonderful son, brother, uncle and friend.

These few paragraphs can never begin to capture the joys and successes of Ron’s life. His impact on literally thousands of lives can never be measured. The loss to his friends, his family and his community can’t be overstated. We love you and we will miss you, Ron.

Due to Covid-19, gathering is limited at this time. A private memorial service for Ron's family, will be held on Saturday, November 21, 2020 at 10:00 AM at Flahiff Funeral Chapel in Caldwell. It will be livestreamed for the public on Flahiff's Facebook page so that Ron's friends and the community can attend virtually. In lieu of flowers, a donation may be made to a scholarship to be established in Ron’s name for Caldwell High students who demonstrate excellence of effort in math and athletics. Donations may be sent to the Ron Nuxoll Memorial Scholarship, CFEO, P.O. Box 122, Caldwell, ID 83606.

To send flowers to the family or plant a tree in memory of Ronald Nuxoll, please visit Tribute Store
Print
Saturday
21
November