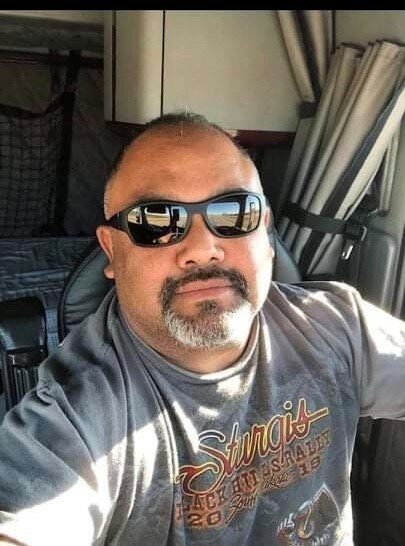 Eloy was born on April 13,1968 to Emeterio Zuniga and Aurora Jimenez in Miami, Florida. He was one out of eight children and grew up in a home full of fun and laughter.  His closeness to his family was undeniable.

In 1992, Eloy married  the love of his life Dora Zuniga in Caldwell, Idaho.  On August 24, 2021, they celebrated 29 years of marriage.  During their time together, they bought a home in Nampa where they happily raised their four children.  He made sure to let everyone know that “Dora is always right y ganale!!!”

In 2003, Eloy received his CDL and began to drive long haul. It was Eloy’s dream to one day own his own semi-truck.  He was going to call his business “ Zboyz Trucking”.  May of 2021, Eloy bought his own semi, a 2022 Peterbilt. He  was proud that he was one step closer to achieving his dream.  Eloy enjoyed keeping his truck clean, listening to music, and driving long haul across states.  For Eloy it was “puro hammer down” when he was in his truck. Although Eloy was born in Florida and a diehard Miami Dolphin fan,  his heart and pride was from Texas. He loved everything Texas, except for the Dallas Cowboys.  Other than that he was a Tejano through and through.  When he drove through Texas, he always made sure to stop at a  Whataburger or Church’s chicken.

Eloy  enjoyed spending time with his wife. After their children were raised, they loved to travel and go on vacations, oftentimes, Dora joined him on his semi.  He loved fishing and going to ride his dirt bikes and four wheelers with his family. Eloy loved spending time with his grandkids by Face Timing them while he was over the road, taking them for a cruise and spoiling them.

Eloy is survived by his loving wife Dora Zuniga,  his sons; Eloy Jr, Nicholas, Martin Villa and Adalina  Torres, Elijah Zuniga and his wife Dora, Eliaz  Zuniga and Citlally Pedraza,  his favorite and one and only daughter, Aundrea Zuniga and Alex Dominguez, his “momma La Reina”, Aurora Jimenez,  his brothers; Juan,  Jesus Manuel (Guero), Emeterio Jr and wife Cassandra, Zaul and his wife Elodia, Anival and his wife Gabby, his sisters; Thelma Garcia and her  husband Auturo, and Annaliah Zuniga.  Eloy is also survived by his adoring grandchildren that he loved very much; Josiah, Allyson, Zatalia, Avery, Aaliyah, Natalie, Clementina, Angelo, and 1 grandson due in October.

Eloy was preceded in death by his father, Emeterio Zuniga.

Eloy will be remembered for his big heart, smile and humor.  We will never forget the love he had for his wife Dora, children, and his grandchildren.  Eloy will be deeply missed.

Until next time, “Nombre, cayate, shut up!”

A viewing service will be held for Eloy on September 24. 2021 from 9 a.m.  to 11 a.m.  at the Flahiff Funeral Chapel. Masks will be required during services. After the viewing, he will be laid to rest at the Canyon Hill Cemetery. Mask will be optional for burial.

Thank you to everyone for their love and support during this tragic time and thank you for everyone who donated to the Zuniga family.

To send flowers to the family or plant a tree in memory of Eloy Zuniga, please visit Tribute Store
Print
Friday
24
September