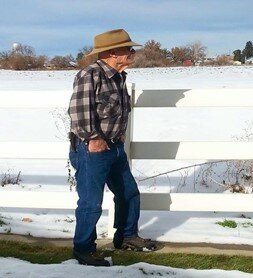 Dave E. Jarrard, age 87, passed away in his home in Parma, Idaho on September 12th, 2021 with his beloved wife of 37 years attending him.

Dave was born on September 10th, 1934 in Keokuk, Iowa to Marie and Lloyd Jarrard. He was a humble man, with humble beginnings. As the oldest of his siblings, Dave quit school at the age of nine to work as a ranch hand mending fences to help support his family in the absence of his father. He quickly decided that he belonged to the land and out of this grew his love and longing for the great outdoors and wide open skies. He was a jack of many trades, but was most known for his logging and ranching skills. Dave was also an avid hunter, fisherman, cowboy and pool player who loved camping and hiking trips. His love of the outdoors and wanderlust took him wherever the wild would call him. He traveled throughout the US until finally settling down for good in Parma, Idaho, with the love of his life Ruthann Jarrard surrounded by the Owyhee’s and near the Snake River that he loved so much.

He was preceded in death by his parents Lloyd and Marie, siblings Mary, Hazel and Glenn and the loss of his only son David Wayne.

He leaves behind his wife Ruthann, sisters Donna and Judy, daughter Nancyanne, step-children James, Terry and Marci, daughter-in-law Julie, grandchildren Anthony and Katrina, great-granddaughters Kenya and Maddison, as well as many nieces, nephews and great-nieces and nephews that he loved as if they were his own children.

It is notable to mention that his greatest legacy to his family was his love of the absolute beauty and wildness of the outdoors which he has passed on to us all. He will be greatly missed, but the wild has called him home.

To send flowers to the family or plant a tree in memory of Dave Jarrard, please visit Tribute Store

Share Your Memory of
Dave
Upload Your Memory View All Memories
Be the first to upload a memory!
Share A Memory
Send Flowers