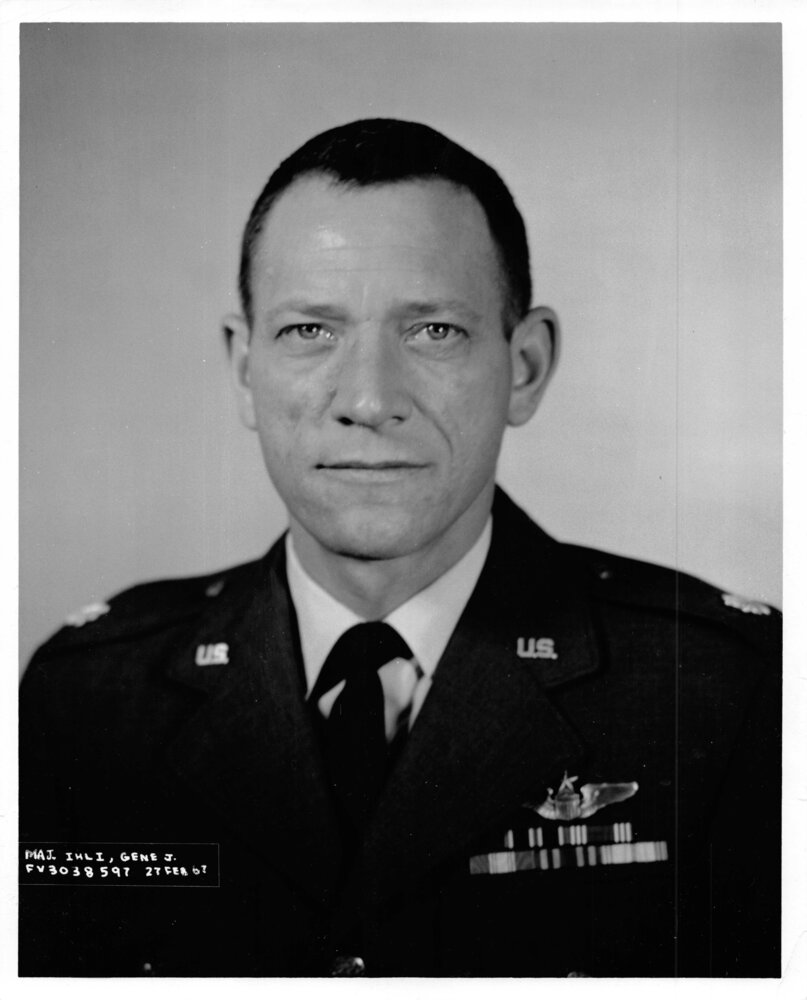 Gene J. Ihli, 90, of Caldwell, passed away at his home in Sand Hollow, surrounded by family, love, and the expert care of Keystone Hospice.

Gene died just a few miles from where he was born and started school. He was the first child of his parents, Louis Ihli and Leona Freitag, who met at a dance in Middleton. Gene has a younger sister, Pat Dodd and brother, Ken. Gene was truly a child of Idaho and would make sure that in his world travels, everyone knew of its beauty and lifestyle.

Gene was accepted to the Air Force Academy and became a fighter pilot, realizing his dream profession. He was a Vietnam Vet and was awarded many honors during that conflict, including three Distinguished Flying Crosses and Top Gun. He was always willing to take the most difficult and dangerous missions because he “wanted those married men to get home to their wives.” Upon his retirement as a Lt. Col., he made the decision to retire and find a quiet solitude existence back in Idaho. That solitude came on 40 acres in Sand Hollow with only a limited number of his father’s tools.

At age 48, he connected with a family friend, Ann Mallea, who was divorced with four mostly grown children: Vicki, Doug, Bambi, and Angela. Suddenly, Gene had a family; he was content. His great love of animals also had a place to call home. The neighbors were few, but very special, as they helped on another with the fruits of the soil. There were lots of “Ihli” relatives in the area to enjoy, and Gene and Ann were active members of Our Lady of the Valley Catholic Church.

As retirement came calling, Gene cut out an acre lot, sold the rest of his land, and designed and built a new home. They had little time to enjoy it when Ann suffered a brain aneurysm and never completely recovered. True to his nature, Gene took sole care of her until her death in 2009. His life as an elderly bachelor was filled with lots of pets, a ferocious appetite for politics, a renewed passion for oil painting, and hunting and fishing trips with family. He loved to read and accumulated an envious library.

Then one day in February of 2014, a mysterious letter appeared in his large packet of daily mail. It was from “Donna”, a girl he had met at a 4th of July dance in Caldwell back in 1956. He was eager to answer the letter, and with the speed of cars and phones, they were married in May 2014. Now he had eight stepchildren and 21 grandchildren. Donna and Gene enjoyed over seven years of marriage and bliss before his passing. Gene will always be remembered by family and friends because of his faith in God, love of country, generous heart, political views, love of animals, and that “cowboy” telephone greeting of “how ya doin’!”

A Rosary and viewing will be held on Sunday, October 3rd from 4-6:00 p.m. at Flahiff Funeral Chapel, 624 Cleveland Blvd. in Caldwell. A Funeral Mass will be held on Monday, October 4th at 10:00 a.m. at Our Lady of the Valley Catholic Church, 1122 W. Linden Road in Caldwell, with time for viewing prior from 9-10 a.m. Burial will take place after at Mount Calvary Cemetery in Nampa.

To send flowers to the family or plant a tree in memory of Eugene Ihli, please visit Tribute Store
Sunday
3
October

Share Your Memory of
Eugene
Upload Your Memory View All Memories
Be the first to upload a memory!
Share A Memory
Send Flowers