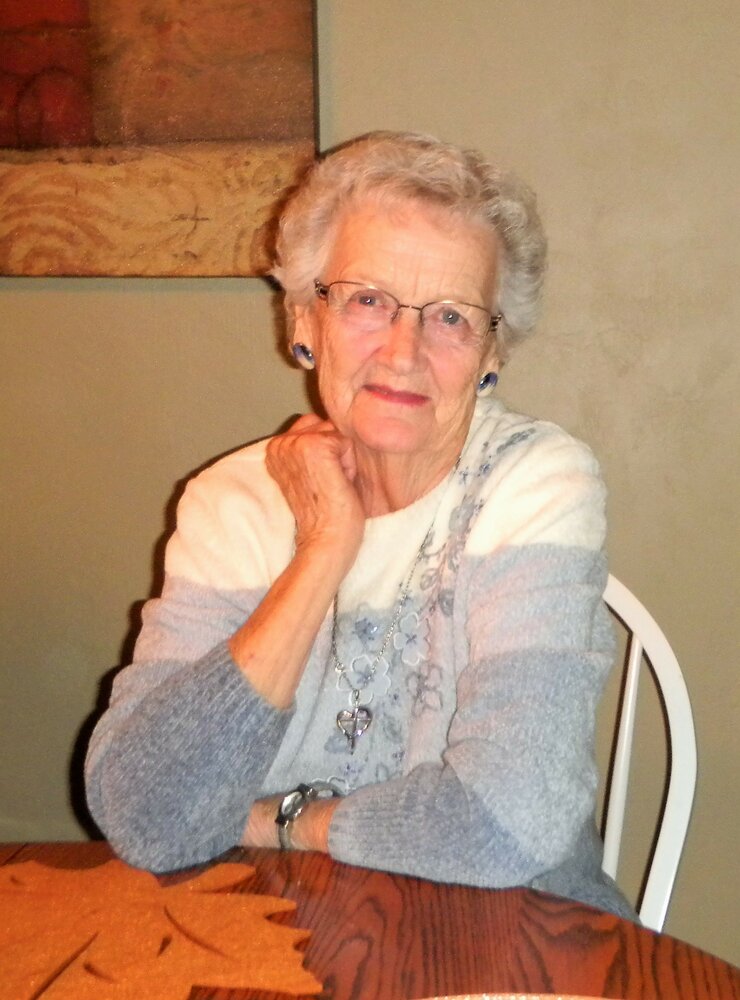 Ila Adele (Sommers) Gerdes, 91, of Homedale, passed away peacefully early Sunday, September 26th of heart failure. Ila was born at her grandparent’s home in Bowmont, a small community near Melba, Idaho, to parents Arthur and Nydia (Carpenter) Sommers on March 7, 1930. Ila attended schools in both Nampa and Middleton and her junior year started working after school as a telephone operator in Boise for Mountain Bell. In her youth she discovered her love for animals, especially dogs.  She loved to tell the story of training the neighbor’s dog to climb a ladder, a skill that eventually saved the dog’s life. Her love for dogs never waned as she was famous for mistakenly calling grandkids by one of the dog’s names. Another childhood pastime was roller skating in Nampa, it was here at the rink that she met her future husband, Don Gerdes.

Don and Ila married on August 14, 1949 at Grace Lutheran Church in Caldwell.  They were married for 62 years to the day, the day Don passed away in 2012. Don was the love of her life. To this union was born 4 children; Pam, Cindy, Sandy, and bonus baby Donnie Gerdes.  It was in Central Cove, East of Homedale, where Don and Ila settled and raised their family, made their living on the farm and created many wonderful memories for kids, grandkids, nieces, nephews and friends. Don and Ila dairied, raised row crops, beef cattle and later were infamous for raising the buffalo on Homedale road. Ila was the best hired man any husband could ask for and was also a coveted ensilage truck driver by many farmers. She miraculously worked on the farm all day long and would have a nutritious meal or tasty baked goods for her family and anyone else who may show up at the house.

When the milk cows left, Ila went to work as a rural mail carrier at the Wilder Post office. She loved her job and worked faithfully through snow, fog and ice for 26 years travelling approximately 100 miles a day.  During these years she made many friends, replaced many of sets of brakes and gained the skill of driving better with one arm from the passenger’s seat. Grandkids fondly recall the entire herd loading up in her mail van “Nelly Bell” to pick asparagus or go for a spin.  Ila was an excellent driver, however not a slow driver. She taught many of the grandkids how to race, even if it meant driving through the front yard to win a race.  Ila was humble, but never slow to brag that at 91 she still had never received a speeding ticket.

Don and Ila worked hard to keep a tight knit family. They strived to raise their family in the faith and love of the Lord and instill in their children an incredible work ethic.  Every occasion was celebrated with family and a meal, many times with one of Ila’s new recipes. Grandkids love that Ila could throw condiments across the kitchen with perfect aim. Their home was filled with laughter and life, nothing pretentions but always authentic. Ila decorated for every holiday and made sure their home was welcoming to all who walked through the door. Decorating, rearranging and repainting furniture was a favorite hobby.  Ila was even known to knock out an entire wall by herself when Don was gone to the livestock sale, rumor has it, that’s the reason Don feared to leave the farm.

Ila was one of the original residents at Grace Assisted Living in Caldwell.  She had many special friends at Grace and was blessed to consider them part of her family and support team as she faced the loss of  her son Donnie, granddaughter Stacey and her keys to drive.  This special team of people kept her laughing and on her toes. Ila loved to laugh and have a good time and was always up for an adventure.  She knew about the highlights and hurts in their lives and prayed faithfully for each of them.  Her family will forever be grateful for the compassion, care and love the staff showed Ila.

Ila is preceded in death by her parents Arthur and Nydia Sommers, brother and sister-in-law Gilbert and Martha Sommers, infant brother Eldon, husband Donald Gerdes, son Donnie Gerdes and Granddaughter Stacey Kelly.  She is survived by children Pam (Fred Kelly), Cindy Gerdes, Sandy (Fred Sarceda), daughter-in-law Dixie Gerdes, forever son-in-law Gary Doi, 6 granddaughters, 3 grandsons, 14 great-grand children and a very special friend Albert Villa. Ila was an inspiration of how to be strong and independent at any age and served as a great role model for our family.

Graveside services at the Wilder Cemetery by Pastor Ross Shaver will take place on October 6th at 2:00 PM under the direction of Flahiff Funeral Chapel in Homedale.

To send flowers to the family or plant a tree in memory of Ila Gerdes, please visit Tribute Store
Wednesday
6
October

Share Your Memory of
Ila
Upload Your Memory View All Memories
Be the first to upload a memory!
Share A Memory
Send Flowers