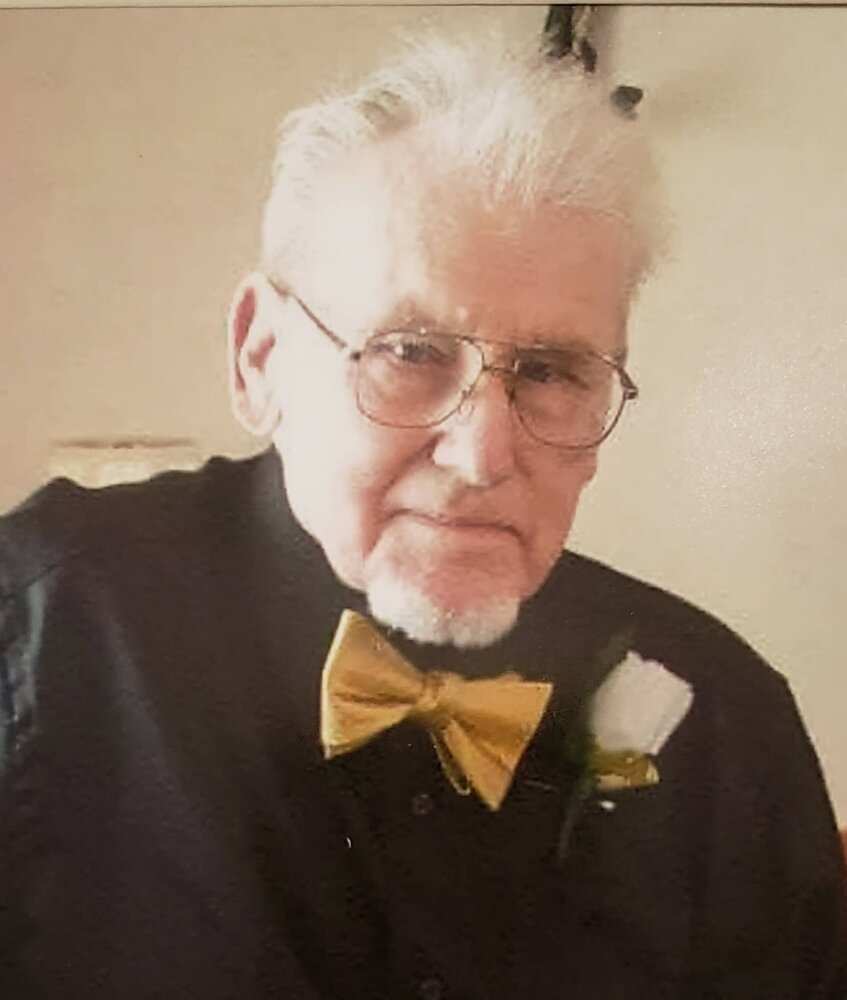 Myrle “Rusty” Williams passed away at home October1, 2021.  He was the youngest of 13 children whom only 3 survived.  His sister Fawntella , brother Charles and Myrle.  Parents John and Caroline welcomed their youngest Myrle into the World September 20, 1925 in Seattle, Washington.

Myrle was an individual with a vast amount of knowledge of so many things. He lived with his mother when his parents separated in Rexburg, Idaho.  And went to Madison High School. When his mother passed away at the age of 13, he dropped out of school and moved to California with his father.  Where he worked in the Almond fields.   Rusty liked being outdoors and working with his hands.

He served in the Navy with the Pacific Fleet during World War Two from 1943-1946 and had to have his father sign as he was only 17 enlisting in Long Beach, California.  He was on the USS LST242.  Then the USS Appalation to Bikini Island.  Where Operations Crossroads did testing atomic bomb tests on ships. Went back to the states where he patrolled the coast on the PCS1377.  He was discharged in Nov 1946.   He was a fireman first class and mechanic.  Then he worked for a pipeline construction company.

He met his wife Darlene Davis who was a cook in the primitive area , There he was a small aircraft pilot, guide , and mechanic on a dude ranch in 1961.  They married September 18, 1962 and a son Marvin born a year later and 2 years later their youngest Daniel.  They were married for 55 years before his wife Darlene passed away.

They lived in Jordan Valley, Oregon till they moved to Nampa in the late 60’s.

He was a Boy Scout leader and had many stories of trips he took with his troop that his sons were in.

He worked for McClure’s Machine shop in Nampa till he moved to The Amalgamated Sugar Company.  Where he was a welder, machinist, and mechanic up until his retirement.

They keep a small amount of livestock which were mostly goats and were always helping with 4-H with youngsters.  After retirement he liked to keep his hands busy braiding and working with leather.  His last project he repaired over a 100 year old 22 rifle for his brother in law.

He was the librarian for the Church of Latter Day Saints. And was well know by so many every where he went he always knew someone.

He was a lifetime member of the American Gold Prospectors Association.  And would go to meetings once a month and have lunch as well as going monthly to have lunch with those he worked with at the sugar factory.

Even at 96 years old he still driving but was no longer driving at night. Always told us, “My license is still good till I’m 99. Guess they want me to stop driving after that.”

He had a bucket list to live to be 100 and when asked- “What you going to do when you turn 100?”  He said “Well I’ll figure that out when I get there.”   And even though his bucket list wasn’t fulfilled.  He had a full life and lived to the fullest.

In 96 years he really watched the world changed as from horse drawn carriage to electric cars.

He was preceded in death by his parents, sister and brother, in-laws and his wife Darlene.

Memorial services will be held on Saturday, October 16, 2021 at 11:00am at the LDS Church at 1985 N. Black Cat Road, Meridian, Idaho. There will be a viewing prior to services at the church from 9:00am to 11:00am. Friends may share a memory of Rusty at www.flahifffuneralchapel.com

To send flowers to the family or plant a tree in memory of Myrle Williams, please visit Tribute Store
Saturday
16
October

Share Your Memory of
Myrle
Upload Your Memory View All Memories
Be the first to upload a memory!
Share A Memory
Send Flowers