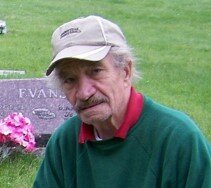 He attended school at Greenleaf Academy, and served in the Army National Guard in Caldwell.  Alan was a skilled commercial artist and sign painter.  He was employed by Anderson Signs, SNARR, Inc. and Signs, Inc.

Alan moved to Riggins, Idaho about 1995 and started his own sign business, Alan Knight Signs.  Alan enjoyed oil painting, hunting and golf.  He was an avid BSU football fan.

Alan is survived by his sister, Sharon Nine (Gordon), of Grangeville, a brother, Ernie Knight (Beverly), of Riggins, and numerous nieces and nephews.  Donations may be made to Special Olympics, Idaho.

To send flowers to the family or plant a tree in memory of Alan Knight, please visit Tribute Store
Print
Share A Memory
Send Flowers