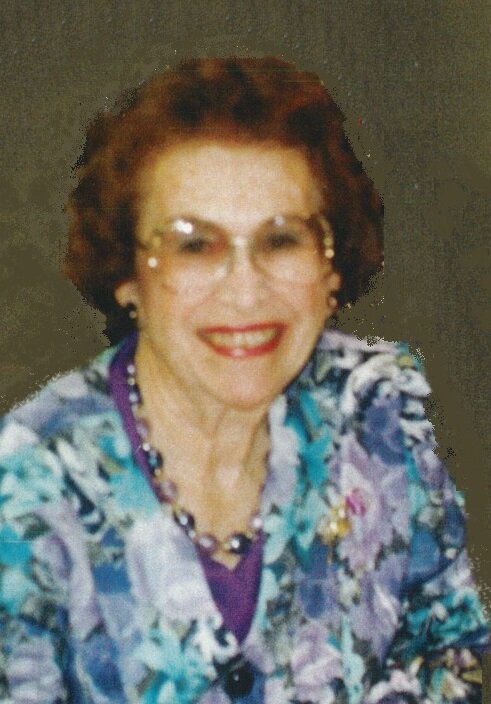 Hazel was born March 17, 1920 in Jordan Valley, Oregon in the home of her grandparent's, John and Soviah Danner.  Her parents were Robert and Ruth Danner.  Her family moved to Danner in 1922 where her father was postmaster.  They moved to Arock in 1924 where her father took up land and established the Danner Mercantile Store on the new Jordan Valley Irrigation District.

Hazel attended nine grades at the Arock School and finished High School in 1937 at Ontario, Oregon.  She then attended Gooding College and Oregon State College at Corvallis.

Hazel married Orville G. Fretwell February 8, 1942 at the First Methodist Church in Boise, Idaho. They ranched at Arock until Pete passed away in 1970.  Hazel was clerk of the Arock School District for 18 years.  She was an agent for the Grange Insurance Company and worked as an accountant at Delamar Silver Mine.   Hazel was master of the Arock Grange, member of the Oregon State Grange and the National Grange.  She taught Sunday School and release classes in Arock and Jordan Valley for over 30 years.  She moved to Caldwell in 1979 and on June 1, 1980 married Irvan Johnson and moved to Twin Falls, ID.

Hazel was an avid historian and authored four books about the area of Jordan Valley.  She contributed much to the ION Museum.  After the death of her husband Irvan in 2006 Hazel moved to Jordan Valley to be near her family.

Hazel traveled to Australia, England, Scotland, Wales Japan Mexico, Canada and three times to Alaska and to visit her son Glenn on the Aleutian Islands.  She spent winters in Arizona and visited her ancestral home in Michigan.

Funeral services will be held on Thursday, February 17, 2020 at 1:00 pm at the High Desert Bible Church in Jordan Valley, Oregon.  Interment will follow at Jordan Valley Cemetery.

To send flowers to the family or plant a tree in memory of Hazel Fretwell Johnson, please visit Tribute Store
Print
Thursday
17
February