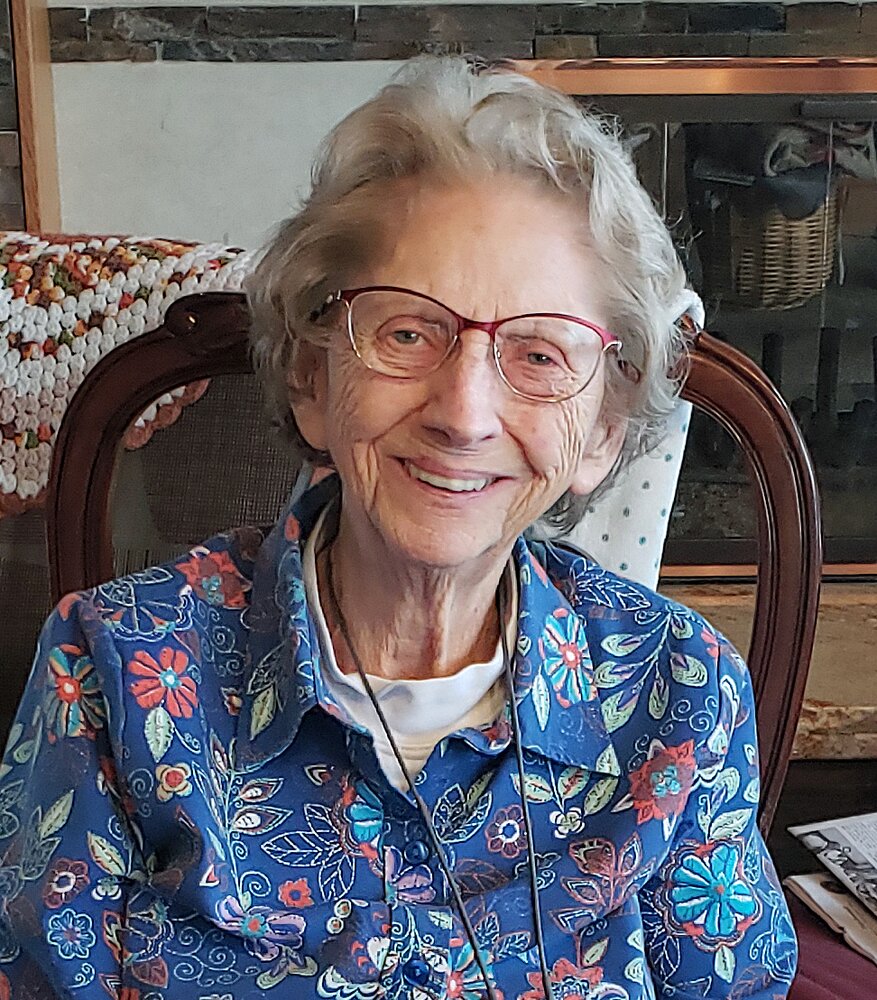 At just 92 years young, Wilma Lucille (Fair) Shewey said her final goodbye on Saturday, February 5, 2022. Her determined spirit, dustbowl determination and kind heart live on through her family, friends and sewing circles throughout the country.

The youngest of Leland (Lee) and Lucile Fair’s three children, Wilma came into the world on April 23, 1929, at the family farm in Smith County, Kansas. Despite the Great Depression, she reflected on her childhood fondly, sometimes quoting a book title, “We had everything but money.”

Many life lessons were learned on the farm, but the academic ones were taught in a one-room schoolhouse. She excelled in math, competing (and winning) several district and state-wide competitions. Wilma was as athletic as she was smart, dominating track-and-field and playing catcher on an adult baseball team while she was still a kid. She also sang a strong alto and led the high school marching band as a four-year drum major and baton twirler.

After graduation, Wilma headed to Denver, Colorado, to pursue an education in a new, cutting-edge technology, “Key Punch.” Her high marks attracted the attention of the F.B.I., who felt she’d make a great addition to staff, and formally accepted her into the agency.

But life had other plans, specifically: A dashing young gentleman named Loyd Shewey. Rather than join the Feds in law enforcement, she joined Loyd in holy matrimony. The couple wed in 1953 in Toledo, Oregon, and soon expanded into a family-of-four with daughters Barbara “Barbie” (1955) and Teresa (1957).

Loyd’s budding career came with a relocation to Boise, Idaho in 1962. The job required lots of travel, which meant Wilma spent weeks at a time raising her daughters by herself. She prioritized education and afterschool activities, and volunteered as a Brownie Girl Scout Leader, Choir Mom at Cathedral of the Rockies and seamstress for entire dance and twirling classes.

Wilma quickly mastered tailoring and turned it into a career. Her business, “The Undercover Cover Company,” sold hand-sewn medical products all over the world. She’d bring the family along to national medical conventions and turn the experiences into full-fledged vacations – a tradition that continued for decades and included entire generations of family.

As talented with numbers as she was with a needle and thread, Wilma also worked as the financial bookkeeper for Loyd’s own appraisal company. As his business grew, they moved to Pocatello, Idaho for even more opportunities.

With their daughters grown up and with families of their own, Wilma and Loyd relocated to the Given’s Hot Springs area of Owhyee County in 1989. They lived in a home they moved from Boise and customized it (by hand) to their liking. Wilma kept herself busy by volunteering in community organizations, such as Opaline Ladies Club, the Owyhee Sage Hens and the Owyhee Bunco Group. The couple later moved to Caldwell, Idaho in 2006, where Loyd passed away in 2010.

Wilma loved spending time with her daughters and their families, passing down decades of wisdom and the occasional Family Farm Recipe. She’ll always be remembered for her loyalty, sense of humor, jitterbug dance moves and Beef-and-Noodle dinners.

Wilma may be gone, but her spirit lives on in all of us.

Services will be conducted by Flahiff Funeral Chapel in Caldwell, with a viewing on February 21, 2022, 5-8 pm, and services on February 22, 2022, 11:00 am, with interment at Idaho State Veterans Cemetery.

To send flowers to the family or plant a tree in memory of Wilma Shewey, please visit Tribute Store
Print
Monday
21
February