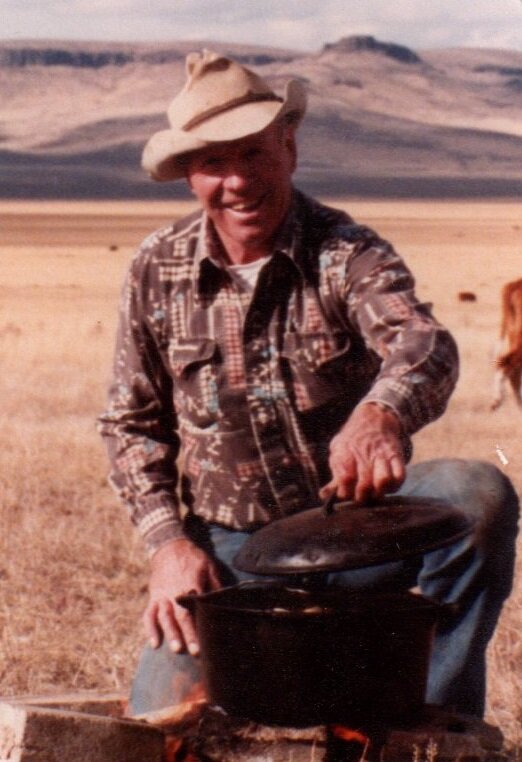 Clifford Gunderson passed away peacefully March 5, 2022 at his home in Arock Oregon at the age of 98.  Funeral services will be held at 1:00 P.M. April 9th at the Arock Community Center.

Cliff Gunderson was born January 17, 1924 in Mary, North Dakota to Casper and Margaret Gunderson. Cliff lost his father at a young age and his Mother, 3 brothers and sister moved to his grandparents ranch in South Dakota.  His grandparents ran around 1700 head of cattle along the Missouri River.  The family endured 7 years of drought and grasshoppers and finally had to sell out.  The   family moved to Harney County, Oregon.  He went to work at 13 years old on various ranches including the ZX and MC ranches haying, buckarooing and starting colts.  Cliff started rodeoing as a teenager with much success.  He spent 18 months in the Navy during World War 11.

On February 7, 1953 Cliff married Alyce Carroll.  Cliff continued to rodeo for a few more years and then settled down to raise his two girls, Terry and Mary.  In 1972 Cliff became manager of the Flying G Ranch near Burns Jct. for 22 years. He then managed the Zimmerman Ranch for 16 years.  Cliff retired at the age of 86. This however did not stop him from helping his daughters on their ranches.  He branded calves at age 97 and planned on roping calves this spring IF it was a warm day.  He rode in the Parade of Big Loop Champions in May of 2021 riding his Big Loop Saddle he won in 1985.

Cliff was preceded in death by his mother and father, brothers Sam, Ted and Casper and his sister Merle, and stepdaughter Bonnie Schmidt.  He is survived by his wife of 69 years Alyce, daughters Terry Fretwell (Robert), Mary Lequerica (Tony), and stepdaughter Patsy Shinkle.  11 grandchildren and numerous great grandchildren.

Memorials may be given to the Arock Community Chapel.

To send flowers to the family or plant a tree in memory of Cliff Gunderson, please visit Tribute Store
Saturday
9
April

Share Your Memory of
Cliff
Upload Your Memory View All Memories
Be the first to upload a memory!
Share A Memory
Send Flowers