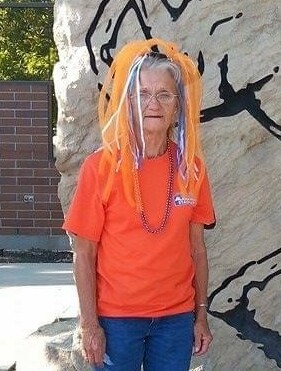 Estella “Stella” Martin-Storms-Saunders was born in Caldwell, Idaho to Lawton and Rubie Martin on November 12, 1948. She entered into rest with her family by her side on April 16, 2022.

Stella grew up in Wilder. She attended Wilder schools and graduated in May 1968. She was on the dance team and pep club.

She worked at various jobs including the small café in Wilder in the 70’s and then off to Kits Manufacturing.

Stella married her high school crush, Jimmy Storms in March 1970, with this marriage, Jim and Stella were blessed with a daughter, Tracy Lynn and son, Stacey James. Jim and Stella divorced in 1976. She was a single mother for several years. During that time, she enjoyed spending time with her friends Linda and Kathy who were also single mamas. There was 1 ole blue station wagon that loaded up 9 kids and 3 mom’s and off they went on many adventures from late night drives in the country listening to tunes, the zoo, car races, the flumes in Homedale, picnics, camping and the list goes on…

Stella later on moved to Nampa to be closer to her mother and brothers. She then met and married, Dennis Saunders. They moved to Nevada and California for a few years coming back to Idaho in 1985. They were blessed with a daughter, Summer Dawn in1986. They later separated.

Stella loved her children, and grandchildren. Then came great-grandchildren that was the icing on the cake.

Stella was an avid gardener (she had the biggest garden in the neighborhood), she canned and froze everything for her family. She loved teaching her daughters and granddaughters how to can. She was a huge fisherwoman, loved camping, going to the races, and let me tell you, we had to plug our ears when her car was winning (that woman has lungs). She was a Seattle Seahawks fan. She promised her nephew, Jimmer, that she would always be a Hawk fan in his memory. Last, but not least, she was a Huge BSU fan, again we had to plug our ears if they were winning or losing.

Stella was one of the kindest hearted woman you would ever meet. Her family, friends, and classmates loved her over the years and who ever came in her path.

She was preceded into rest with welcoming arms to show her the way around heaven by her, father; mother; her children’s father; great-granddaughter, Alley; nephews, Donnie, David, and Jimmer.

In lieu of flowers, donations are being accepted for her headstone. These can be given to Teri Dickinson through venmo, or you can make a deposit at Washington Trust Bank in Nampa on Cassia Street in Stella Saunders account.

Memorial service will be held on Wednesday, April 27, 2022 at 11:00 am at Free Holiness Church, Wilder, Idaho. There will be a viewing held on Monday, April 25, 2022 from 6:00 pm to 8:00 pm at Flahiff Funeral Chapel, 624 Cleveland Blvd, Caldwell, Idaho. Inurnment will follow services at the Wilder Cemetery, Wilder, Idaho.

To send flowers to the family or plant a tree in memory of Estella Martin-Storms-Saunders, please visit Tribute Store
Monday
25
April

Share Your Memory of
Estella
Upload Your Memory View All Memories
Be the first to upload a memory!
Share A Memory
Send Flowers