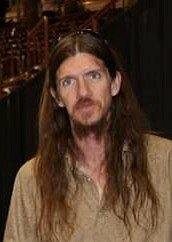 Curtis was born February 15, 1968, in Reno, Nevada to Elwood and Patsy Nilsson who couldn’t have been happier with his arrival.  He spent his early childhood years in Las Vegas, Nevada.  His family later moved to Nampa, Idaho where he attended Junior and Senior High School.  He had a few different jobs after High School until 1995 when he started working at the Cheese Factory.  It was there that he met Trina and a few years later they married May 17, 2000 in Caldwell, Idaho.

Curtis loved his family, reading, music, motorcycles, comic books, 90’s action movies and Halloween among other things.  He was amazing at decking his house out for Halloween and enjoyed sharing that with everyone who came by.  He was a hard worker with an amazing work ethic.  Not everyone got the chance to know how big of a heart he had under his tough exterior but If you were lucky enough to be a friend or family member in his small circle, you always knew he had your back. He was an amazing husband, father, grandpa, son and brother and he will be desperately missed. He was one of a kind and we were all blessed to have him in our lives. He was many things, but mostly he was loved.

To send flowers to the family or plant a tree in memory of Curtis Nilsson, please visit Tribute Store
Friday
13
May