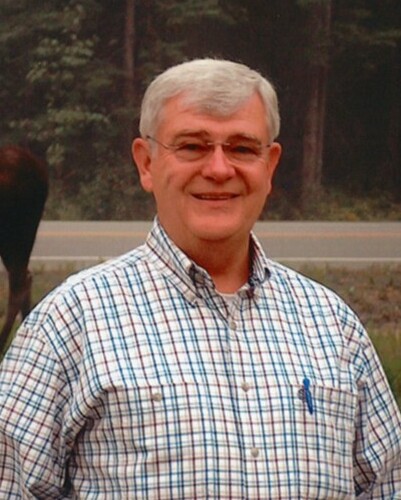 John Waldo Weeks was born in Caldwell, Idaho, on Dec 6, 1949 to (Waldo) Ingle and Margaret Weeks. He passed peacefully at home with family and the family dog Evie at his side on May 21, 2022 after a long and courageous battle with leiomyosarcoma cancer.

John was raised in Caldwell, attended Caldwell schools, and belonged to Boone Memorial Presbyterian Church, Demolay and Boy Scouts of America. He was active and very competitive in the school band, played the clarinet and performed in many music festivals. It was a very proud moment for him when he performed the "Flight of the Bumblebee" solo on his clarinet during a festival. As an adult he was a member of the Caldwell Centennial Band.

He also served as President of the Nampa Bow Chiefs, and participated in numerous archery events. He was an avid hunter, fisherman, and outdoorsman. His grilling and bread baking skills could not be paralleled.

He had many memorable events in his childhood. The Weeks family had the first TV in Caldwell. John, his sisters and all the neighborhood kids would gather around to watch the test patterns over and over. One of his most memorable was the Fourth of July parties his family held each year. He, his sisters and friends donned their scout uniforms and they performed a flag ceremony. He loved fireworks and he learned at an early age how to handle firecrackers. Another proud moment for him was the year his father served as President of the Caldwell Night Rodeo and Audie Murphy was a guest at the rodeo. John and his sisters got to have their picture taken with Audie, one of the most decorated American combat soldiers of World War II.

After graduating from Caldwell High School in 1968, he attended college at University of Idaho and Boise State University. In 1972 he enlisted in the United States Marine Corps. After basic training in San Diego, he remained on active duty for 8 years, stationed in Millington TN, El Toro CA, Yuma AZ, Norman OK and again Yuma AZ. During those years he attended college at the University of Oklahoma and Arizona Western College.

John married his high school sweetheart Gerry (Motichka) on July 10, 1972. They were blessed with three daughters: Shawna, Marcella and Janet.

John and Gerry would have celebrated their golden 50th anniversary this year.

He was the proudest husband, father and grandpa (aka "Boompa" and "Pa"), and would brag about his wife, daughters and grandchildren every chance he was given. John regularly attended events his daughters were involved in and was their biggest cheerleader.

In his professional career, his work involved installing and maintaining water monitoring systems all over the United States, Puerto Rico, Mexico and Thailand. He worked for Sutron Corp and Vitel, Inc, as a contractor to the Bureau of Reclamation while living in Caldwell. In 2002 John and Gerry moved to Beaverton, OR, when he began working for Stevens Water Monitoring in Beaverton. In 2004 he began his career with the Federal Government working for the USDA, Natural Resources Conservation Service and National Water and Climate Center in Portland, OR. After retiring in 2019, they moved to Nampa, ID, to be near family.

To send flowers to the family or plant a tree in memory of John Weeks, please visit Tribute Store
Wednesday
1
June