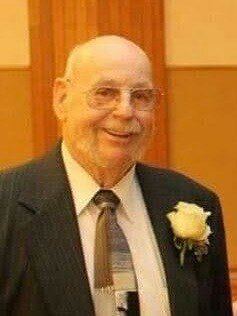 Nelson “Wayne” Jensen was born in Roberts, Idaho on August 6, 1935 as the second son of Emery and Thelma Willyerd Jensen. He attended elementary and middle school in Roberts, Topance, and Rigby, Idaho, graduating from Nampa High School in 1954.  With life-long best friends, Ralph Moore and Harvey Jackman.  After high school dad held a variety of jobs until he was old enough to serve in the Four Corners Mission for the Church of Jesus Christ of Latter-day Saints serving the Navajo and Hopi people. Dad served for two years and three months to allow him time to learn the Navajo language. On his mission dad had some wonderful companions, including Ronald Lohman, who later - along with his wife Rosemary – set him up on a blind date with a cute brunette who later became our mom. After his mission, dad attended Boise Jr. College and Utah State University earning a bachelor’s degree in Personnel Management.  Dad worked to pay his way through school as he went.  Immediately after graduation in 1963 two months and 11 days after they met, Dad married Freda Marie Richey in the Salt Lake Temple on May 29, 1963.  With a successful interview on his wedding day, he soon began working for the Idaho Department of Employment where he worked in various capacities for 34 years retiring in August 1997.  Including managing the Weiser Employment office which brought them here in May of 1971. Where they raised their six children.  Patricia, Jessica, Jack, Vanessa, Tonalea and Margaret.  After retirement mom and dad enjoyed taking trips in their motorhome and visiting their family as dad continued to farm.  When mom became ill, dad devoted his life to her care.  Serving her with love and compassion for many years until she passed away suddenly in 2016. Dad passed away on Friday, May 27, 2022 in Weiser, Idaho.

Besides our mother, dad was preceded in death by his parents, and siblings, La Mont Jensen, Deanna Moser, Leondus Jensen, JayDell Jensen.  He is survived by his sister Dweena Gaisford of Lehi, Utah, his six children and their spouses: Patricia (Rick) Harrahill of Palmer, NE, Jessica (Darwin) Davis of Caldwell, ID, Jack (LeeAnn) Jensen of Ontario, OR, Vanessa (Wade) Symons of Filer, ID, Tonalea Atnip & Scott Johnson of Fruitland, ID, Margaret (Del) Frnka of Eagle Lake, TX. Twenty-one grandchildren, 8 great-grandchildren and one on the way. Five of whom were born in the last year – which was a treat for dad, he was truly delighted with additions to his posterity.

Funeral services will be held on Friday, June 10, 2022 at 11:00am at the Church of Jesus Christ of Latter-day Saints in Weiser, ID.  A viewing will be held an hour prior to the service also at the church.  Interment will be held on Saturday, June 11, 2022 at 2:00pm at Little Butte Cemetery in Rigby, ID.

To stream the funeral services live please join the zoom meeting at https://zoom.us/j/96830213533

To send flowers to the family or plant a tree in memory of Wayne Jensen, please visit Tribute Store
Friday
10
June

Share Your Memory of
Wayne
Upload Your Memory View All Memories
Be the first to upload a memory!
Share A Memory
Send Flowers