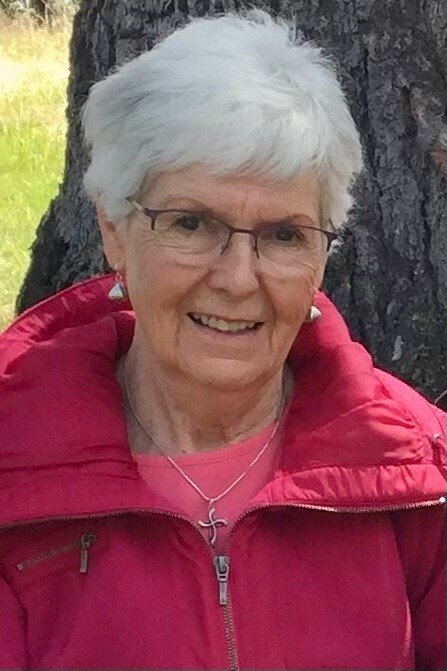 Our beloved mother, Yolande Marie Moore, passed away at the home of her oldest daughter of natural causes on Sunday, June 12, 2022, at the age of 87. She was surrounded by many of her children, their spouses, and some of her grandchildren and great grandchildren. More than anything, Mom cherished her family and her faith.

Mom was a devoted mother to seven children including Steve (Jan), Brenda Fly (David), twins #1 Yolande Knight (Steve) and Eric (Cherrie), Michelle George (Brad), and twins #2 Cecile Young (Trent) and Theresa Ohge (Michael who is deceased). Mom was pleased to be called “Mémé“ by 20 grandchildren and 20 great grandchildren (with one more on the way).

Born in 1935 in Rocé, France in her grandparents’ home, Mom remembered precious years during WWII when she lived with them along with her dear cousin, Michèle. Mom was the favorite oldest (and only) sister of four rambunctious brothers, Alain, Gérald, Christian, and Thierry. After the war, the family lived in several cities throughout the northwestern part of France as her parents owned and developed various restaurants. Mom attended Catholic parochial schools throughout her life loving the sisters and feeling of faith and community.

Mom met Dad (“Bill”) in Poitiers, France, while he was serving as a 2LT in the U.S. Army. Proficient in speaking English, Mom was employed as a phone operator at the local Army base.

They were married in 1957 with the blessing of her father and mother, Raymond and Léone (Rétif) Rolfe. Their first child was born in France and shortly afterwards she flew with her husband and young son to the United States. With some challenges, her little family finally made it to Idaho where she was greeted for the first time by Dad’s parents who tried to make her feel at home. In 1962, Mom proudly became an American Citizen.

Mom and Dad continued to follow U.S. Army orders living in five states and two countries, moving many times throughout their married life while raising their seven children. Though Mom learned the unique customs and traditions of Americans, she continued to remain her classy French-self.

Mom enjoyed serving others by being a den mother to squirrly cub scouts, a French teacher to teenaged students, a classy hostess with a fabulous accent at the famous Saratoga Restaurant in Caldwell, a talented cook to enthused wannabe chefs and food enthusiasts, an avid artist, a skillful florist (by trade and by fun), a Piece Maker creating beautiful quilts to comfort the sick, a faithful Eucharastic Minister for her Church and visitor of the lonely and the ill, a dedicated member of the Women of Faith, and a trusted friend.

Over the last few years Mom courageously endured the ravages of dementia to the very end, and will forever be remembered as our cherished mother and friend. She was our hero. Mom was preceded in death by her parents, loving husband, two brothers, and a sweet granddaughter. Friends and family are invited to attend a funeral mass and service held in her honor at Our Lady of the Valley Catholic Church in Caldwell on Friday, June 24 at 1 p.m. Immediately following the service, please join us for a reception at the pavilion located outside on the church grounds.

To send flowers to the family or plant a tree in memory of Yolande Moore, please visit Tribute Store
Print
Friday
24
June