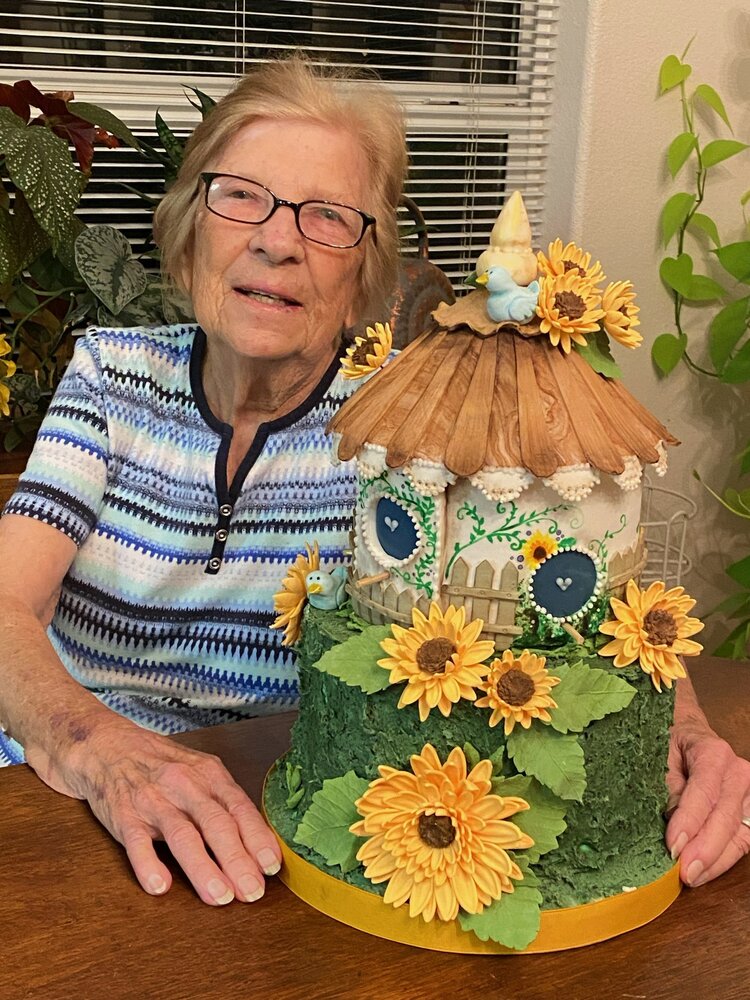 In the early morning hours of August 4th, with devoted daughter Paula at her side, Lida’s loving, caring heart gave out, leaving behind a grieving but grateful family for all the years we had her in our lives.

Lida was born in Duncan, Nebraska on September 7th , 1932 to PJ and Lucille Carter. Even though she was the only girl of seven children, she had determination and a strong will that allowed her to always hold her own with her brothers. When she was 9, her family moved to Couer D’Alene, Idaho where they farmed, raised sheep and logged the land. Lida often said that a new world opened up to her when she attended the University of Idaho where she earned a bachelor’s degree in elementary education. She also met a young man, Ralph Little, who became her husband on January 31st, 1953. She taught for a year in Kellogg. Then Ralph was commissioned by the Army and Lida began the next phase of her life as a military wife. During the next 20 years, Ralph and Lida lived in Germany and various states across the country and welcomed their 4 children. Lida lived in Couer D’Alene while Ralph completed 3 tours of duty in Viet Nam. While Ralph was overseas, Lida returned to the classroom as a 2 nd grade teacher for one year. In 1974, Ralph retired from the military and they moved to Caldwell to begin the next chapter of their lives – life on the farm.

Lida’s three grand passions were family, service to community and gardening. She satisfied her passion for family through hosting numerous gatherings at the farm, having the grandkids out to spend the night with her and organizing many memorable camping trips. She pursued her passion for community service with almost 50 years of work with the Pleasant Ridge Grange, volunteering at Pet Haven thrift shop and participating as a poll worker in local elections. And finally, her garden – ah, her garden. A magical plot of land filled with gorgeous flowers and tasty vegetables of all kinds. She was so intent on having the most successful garden that she took the courses to become a Master Gardener. In the little bit of spare time that she had, she league bowled for many years and travelled whenever the opportunity presented itself.

In 2006, after a successful 53 years of marriage, she lost her husband. 5 years later, she met Paul Hellinger and a new chapter was written. She and Paul had some great adventures together – a road trip across the country to Florida and back, another road trip to Alaska and lots of treks to Jackpot. After 10 years of loving companionship, she suffered another loss when Paul died.

Lida is survived by her 4 children who were her pride and joy: Paula Hylinski, Carter (Lana) Little, Diane (Sandy) Blackburn, and Susan (Chris) Matuszek, 9 grandchildren, 5 great grandchildren and many extended family members. She was predeceased by her parents, her husband Ralph, her 6 brothers: Lyndall, Marvin, Ivan, Russell, Alan and Baby boy Carter, grandson Jason, granddaughter Carrie and companion Paul.

If you asked Lida her age, she always maintained that she was 39. She will forever be 39 to us. She was the heart of our family and will be missed by us every day that we have left. Our heartfelt thanks for all their care, support and comfort go to Tiffany, Hillary, Amy, Beth, Darla, Robert and Christina of Treasure Valley Hospice and Matthew and Emmy of Visiting Angels.

A graveside service will be on Friday, August 12th at 11:00 AM at Canyon Hill Cemetery. Following the service, a gathering of family and friends will take place at the farm, 24831 Old Highway 30, Caldwell. In lieu of flowers, please consider a donation to The Lida C. Little Education Scholarship Endowment, University of Idaho Foundation.

To send flowers to the family or plant a tree in memory of Lida Little, please visit Tribute Store
Friday
12
August

Share Your Memory of
Lida
Upload Your Memory View All Memories
Be the first to upload a memory!
Share A Memory
Send Flowers