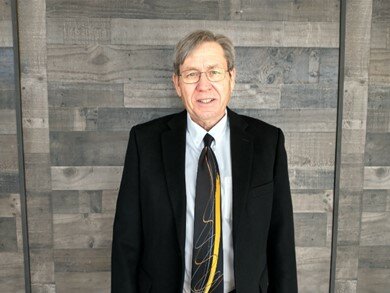 James “Jim” Wilhite, 70, of Caldwell went home to be with the Lord on October 2, 2022 after a lengthy battle with lung disease. Jim was born to Merl and Vera Wilhite on February 15, 1952. He was raised with his older sister and brother on the family ranch and developed a strong work ethic even as a youngster. He attended school in Star, Fruitland, and eventually graduated high school at Greenleaf Friends Academy where he met his future wife. Jim went on to attend college at Boise Junior College and finished an Ag degree at the University of Idaho. During and after college James worked with his father custom stacking hay. Eventually he ended up working for First Security Bank as an Agricultural Representative for 30 years while selling hay stacking equipment on the side as a “hobby”.

Jim married Treva Sullivan in 1975 and went on to raise two sons. He enjoyed traveling with Treva and the two were able to see most of the U.S., Hawaii, and parts of Europe.

Church was an important part of Jim’s life. He was saved at Quaker Hill church camp as a young boy, and he and Treva attended Karcher Nazarene in Nampa for more than 30 years, helping the church achieve many of the dreams and plans they envisioned.

Jim was preceded in death by his parents, his wife Treva, and his brother Bud. He is survived by his sister Nancy (Dave) Kueneman, sister-in-law Kerry Wilhite, son Luke (Chandra) Wilhite, and their daughters Hadlee and Paige, and son Brady (Jenna) Wilhite and their children Oliver, Jackson, Lydia, and Samuel.

Funeral arrangements are being handled by Flahiff’s in Caldwell, with a service to be held at 10 am on Friday October 7, 2022 at Karcher Church of the Nazarene in Nampa. Donations in lieu of flowers may be made to Child Evangelism Fellowship of Treasure Valley.

To send flowers to the family or plant a tree in memory of James Wilhite, please visit Tribute Store
Friday
7
October

Share Your Memory of
James
Upload Your Memory View All Memories
Be the first to upload a memory!
Share A Memory
Send Flowers