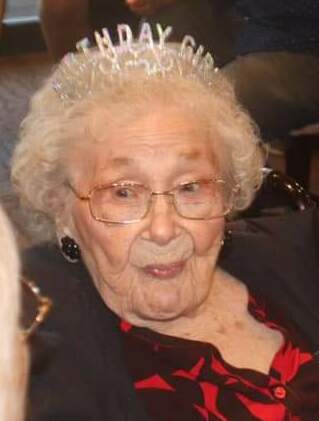 Margaret Jane Cashman passed away peacefully in her sleep of natural causes on Friday, December 9th, 2022, in Boise, Idaho. Margaret was 100 years old. Born in southern Idaho in 1922 to John and Albina, she was the last of 13 children. Her family later moved to their farm in the Nampa area. Margaret went to Chisholm Elementary and graduated from Nampa High School.

Margaret completed secretarial school and began her career at Dairymen’s Creamery in Caldwell. In 1942, Margaret married Jackson D. Cashman and had three of their four children; Rebecca Marie, Daniel Joseph, Margaret Kathleen. The family moved to southern California in 1956, where their fourth child, Mary Christine, was born in 1960. Margaret worked for Farmers Insurance from the mid-sixties until her and Jack moved back to Notus, Idaho in 1977. In 1981, Margaret and Jack moved to Middleton where they resided until Jack’s passing in 1982.

Margaret joined Avon, where she worked with her community for 30 years and made it into the Presidential Club and won many awards because of her warmth and genuine personality. In the early 90’s Margaret met Bill Welker at a dance; they became great partners and created 20 years' worth of memories from traveling to outings and annual easter egg hunts in their back yard with their grandchildren.

Margaret enjoyed many aspects of life, especially taking the kids to the beach in California, dancing, staying active and traveling until her health no longer permitted her to. Family meant the world to her so hosting holiday parties was a top priority, her favorite being Christmas Eve dinner. Margaret loved celebrating and was game for almost everything; parades, fireworks, sledding in the snow and camping. When her children and grandchildren said, “Let’s go!,” she was always by their side for the adventure. Margaret loved shopping and is known for her impeccable taste and always made an effort to look her absolute best.

Margaret is a devout Catholic and her faith was especially important to her. She was preceded in death by her husband Jackson, partner Bill, son Daniel Joseph and her parents and siblings, she was the last of thirteen children. She is survived by her children: Rebecca (Rick) Needles, Daughter in law Billie Jean Cashman, Kathleen (James) Shea, and Chris (Kathleen) Cashman. Grandchildren: Richard, Byron, Stacie, Jack, Anna, Jeff, Sant, Tarn, Beth, Kristina, Matthew, Seth, and Jamie. As well as many Great Grandchildren and Great Great Grandchildren and many nieces and nephews both Great and Great Great.

To send flowers to the family or plant a tree in memory of Margaret Cashman, please visit Tribute Store
Friday
30
December

Share Your Memory of
Margaret
Upload Your Memory View All Memories
Be the first to upload a memory!
Share A Memory
Send Flowers